Update From The Board

The Board would like to welcome Meenakshi Chaudhary from Defence Construction Canada as our newest member. We are looking forward to the new ideas and energy that she brings to the position.

As we close out the first quarter of 2021, we can look back over our successful re-engagement of our membership through great attendance at our lunch ‘n learns thus far. We have hosted a couple this year with another coming up in April from Dr. Diane Bothelo of RPC who will be discussing Legionella and Legionnaire’s disease: Water testing and risk management.

With the recent installation of Premier Rankin in Nova Scotia there has been a strong focus on greening the economy and making Nova Scotia the first Carbon-neutral province in Canada. To that end we have included a couple of articles in this newsletter that focus on the environment.

Finally, there is a definite feel of Spring in the air with warmth in the sun and higher temperatures, and talk of reopening the Atlantic Bubble in the not too distant future. All positive signs for 2021!

On behalf of the Board, thank you.

ESAM has continued with our popular Lunch ‘N Learn by going virtual in 2020. Although we do miss the opportunity to spend time in person with attendees and members, we are very pleased with the response we have had to our online presentations.

On February 23rd Dr. Terry Obal with Bureau Veritas presented PFAS, Total Organic Precursors (TOPs) and Total Organic Fluorine (TOF) “What’s the difference and when to use one over the other?”. This presentation provided an opportunity to learn about PFAS analytical techniques, their advantages and limitations, and descriptions of specific situations where it is advantageous to use one over the other, or to have one complement the other.

Our next Lunch ‘n Learn is tentatively scheduled for April 7th when Dr. Diane Botelho from the Research and Productivity Council (RPC) will present Legionella and Legionnaire’s Disease: Water testing and Risk Management. Final details will be sent out to our membership closer to the date.

These lunch ‘n learns are a great opportunity to connect with our membership and to gain insight into timely topics presented by those who are directly involved. Please keep an eye out for our next event. We hope to see you then!

The Canadian Institute’s advanced conference on Contaminated Sites Liability & Litigation Risk takes a deep dive into the most critical challenges affecting land developers, real estate and legal professionals, and environmental management officials. Join this one-day national event on April 22nd, 2021 via a dynamic virtual platform, to delve into the law, regulation and enforcement.

The Federal Contaminated Sites Action Plan (FCSAP) has earmarked $1.16 billion to be spent by 2024 to reduce environmental and human health risks from known federal contaminated sites and associated federal financial liabilities. Find out how the funding is being allocated and lessons learned from contaminated land remediation case studies.

View the Full Agenda and List of Distinguished Speakers and Register Today!

This is your national comprehensive guide to environmental monitoring, reporting and complying with the Impact Assessment Act. View the Full Agenda and Register Today! 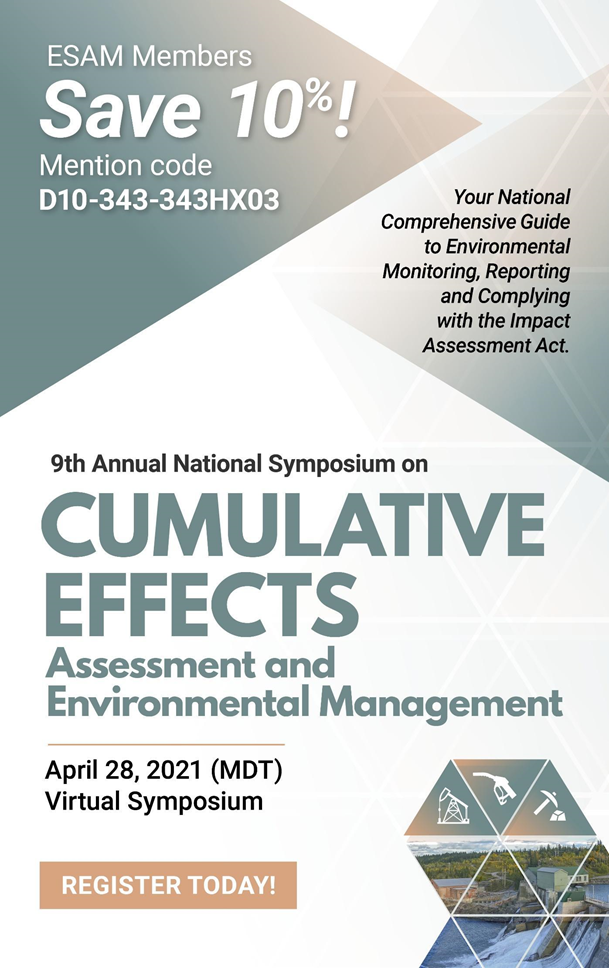 A special thank you to our premier and prominent members…

Environmental Labour Market Challenges and Opportunities in the Decade Ahead

While other markets face long recoveries ahead, forecasts for environmental employment demand are positive with job openings anticipated to approach a quarter-million by 2029.

Environmental priorities, regulations, and investment have intensified over the last decade and these changes have contributed to the substantial growth of green jobs in Canada. Eco Canada’s research forecasts sizeable hiring demand across the environmental sector due to a combination of job creation and high levels of retirement, opening up opportunities at all career levels.

The report can be downloaded here: https://www.eco.ca/research/report/environmental-labour-demand-outlook/ 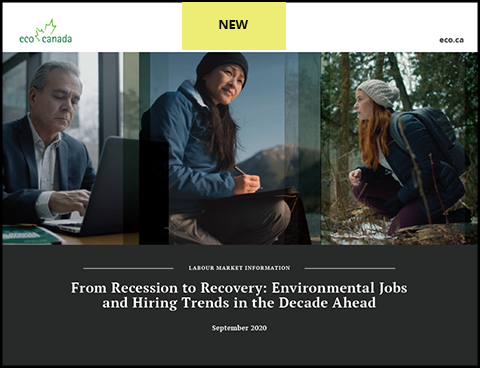 Make your mark on the Canadian environmental sector’s future

Does your organization employ environmental talent? Or are you an environmental worker yourself? If you answered yes to either of these questions, ECO Canada’s 2021 Environmental HR Survey wants to hear from you.

Whether you are an employer or employee, your feedback is crucial to Canada’s understanding of the sector and can make a real impact on the future of the environmental workforce across all industries, occupations and regions.

The purpose of this survey is to create a profile of Canada’s environmental workforce, understand compensation levels, and identify key HR trends. Your contribution will help ECO Canada and its partners (us included) develop and deliver resources to build the world’s leading environmental workforce, right here in Canada. As an added benefit, participants will be eligible to win prizes and receive discounts on products and services.

Staying out of Nature’s Way

With 13,000 km of shoreline, our province is just a hair over 5 percent of Canada’s overall coastline, ranking as the world’s longest at nearly 244,000 total kilometers. And that’s a lot of shoreline to protect from climate change and its effects on sea level rise, temperature increase, weather changes and more.

“We have so many vulnerable areas, and the effect of sea level rise, along with increasingly severe flooding and some of the most aggressive erosion rates in all of Canada was a mandate for action.”

The Act does not mean there will be no construction on or near the coast, but Somers says it will create a framework for preventing unnecessary damage to coastal ecosystems.

He adds that a significant aspect of this work is the creation of a Coastal Protection Zone and, “While we don’t know yet how wide this will be, it will straddle the ordinary high-water mark around the entire coastline, including major estuaries.”

The mechanisms of the Act will be spelled out in regulations currently being developed.

“In our process of developing and writing  the regulations  we are required to consider geomatics, geology, engineering, municipal planning and policy.”

Somers says an important part of the Act is establishing clear rules for building shoreline structures that may harm ecosystems and cause unnecessary interference with the natural dynamic of the coast.  This would apply to wharves, boat slips, and shoreline armoring.

“The objective here is to protect vulnerable coastal ecosystems such as salt marshes and barrier beaches that provide habitat, support biodiversity, sequester carbon dioxide and provide natural infrastructure to defend upland areas from the force of the open ocean.

“The other important aspect of the Act is to ensure that new construction on the coast happens in areas that are less vulnerable to sea level rise, coastal flooding and coastal erosion. ”

The Act regulations, Somers says, “will work by being implemented through existing building municipal permit processes. The primary regulatory tools here are a system of vertical and horizontal building setbacks.

He adds a novel aspect of the Act is how the horizontal setbacks–while not a new concept–will be put into action across the province.

‘The geology, topography and exposure to wave energy varies significantly around our coastline, sometimes within a few tens of meters.  This makes it impractical to set a single appropriate setback for universal use across the Province.

“If someone wants to build within the Coastal Protection Zone they will need to hire a designated  professional to assess the erosion risks of their proposed building site; and, that professional must use a specific methodology which is currently under development,” Somers says.

Listening to all voices

“In 2018 we had consultations with a broad range of stakeholders who informed the Act itself,” Somers explains. He says he hears regularly from individuals or groups needing information, or who have inquiries or concerns, and is always happy to help and answer questions.

“The Act is of interest and relevant to a wide audience including municipalities, ecology and advocacy organizations, landowners, realtors, and professional groups.

He affirms that once the Regulations are finalized, they will then go through the process of Cabinet approval.

“Then once approved, these will put conditions on building permits issued by municipalities. It’s not our intent to impede building but to protect people and our environment.”

Somers adds that designers, engineers, realtors, property owners, “and anyone who has an interest in development on the coast will need to know how their plans or their roles will be affected.”

Existing coastal structures will, however, be grandfathered into the Act. Somers says that as long as the footprint and size of the structure are not being expanded, routine maintenance and minor modifications are not affected.

Somers provides an effective illustration of the enormity of the Regulations to confer coastal Provincial protection.

“Here is the reality. We have a very convoluted coastline, but if you stretched it out as a linear distance it would reach incredibly, from Halifax to Bangkok, Thailand. That’s a big job in shoreline protection and a lot to cover–you can’t rush.”

Within the Act is language describing its principles as “…risk-informed decisions regarding development in coastal areas are an important part of climate change adaptation given the inevitability of relative sea-level rise, coastal flooding, storm surge and coastal erosion and their related impacts on the Province”.

Somers however, says it succinctly and, in one sentence:

“Our focus is pretty much about avoiding future collisions with climate change.”

Somers welcome inquiries and can be reached at:  John.Somers@novascotia.ca

Barbara L. Hesselgrave is a science and environmental author contributing regularly to Erosion Control, Municipal Solid Waste Management, Stormwater and other industry titles, and is a graduate of the Association of Climate Change Officers (ACCO) program. 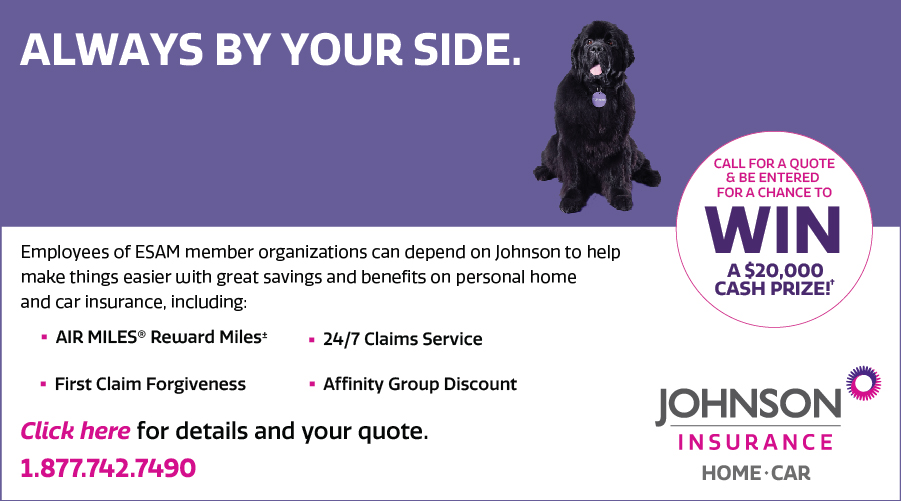